More votes for poets? Not if they’re dead….

Gordon Brown called on ‘the great poet William Blake’ to support his campaign, as noted in an earlier post. Not to be outdone, the other contenders have brandished their poetic sensitivities on the National Poetry Day site. It looks as if this could be a coalition squabble, since Lib-Dem leader Nick Clegg also wants to lay claim to Blake, citing ‘Eternity’: ‘it’s a fantastic way of saying “seize the day” and the perfect poem to read in times of trouble, really uplifting.’ It’s time to ‘seize the day’ yourself, Nick!

David Cameron chose Wilfred Owen: ‘I still remember the first time I read his poems and the incredible power and anger about the First World War. For me, they were literally an eye-opener.’ Literally, David? Were you normally asleep during poetry lessons at Eton? I can feel a Lear moment coming on:

Get thee glass eyes;
And, like a scurvy politician, seem
To see the things thou dost not.

This politician can hear Owen’s anger about about the First World War but is still happy to press ahead with buying Trident nuclear submarines, I recall. Alexander Pope in Rape of the Lock actually preferred a good drink, his politicians only pretend to be blind:

Coffee, which makes the politician wise
And see through all things with his half-shut eyes

Can we have both rhyme and reason at election time? See and hear Danny Chivers’ lively ‘Election Day’ poem here (and on YouTube) and decide where you’ll cast your vote!

Shakespeare and our other saints

It’s St George’s Day again. Last year I was startled to be presented with a synthetic rose (made in China) on behalf of Tameside Council to celebrate England’s patron saint. Today in The Guardian, Ian McMillan reminds us that April 23rd is a deadly day for poets, marking as it does the deaths of not only Shakespeare but also Wordsworth, Cervantes, Vaughan, Brooke and others. He’s staying in today, just in case.

A more cheerful celebration might be to read James Shapiro’s fascinating account in 1599 of the year the Globe was built, Shakespeare completed Henry V, Julius Caesar and As You Like It and drafted Hamlet. Those who are rather troubled by the pushy patriotism of today’s flag wavers should enjoy the reflection by Michael Goldfarb on last night’s Night Waves (BBC Radio 3), in which he points out just how many other countries claim St George (he was Turkish, for a start). For a more appropriate patron saint, he suggests Bede, who died on 26 May 735 – though his feast day, confusingly, is May 25. Sometimes it takes an outsider such as the American Goldfarb, to remind us of the oddities of our customs. (His short contribution isn’t listed on the Night Waves page but starts about 38 minutes into the programme.)

For a quick and colourful account of Bede and much else, take a look at Alice in Sunderland

by Bryan Talbot, which featured in an earlier post.

The National Theatre has some really useful education packs from productions past as well as present – though they’re not very easy to find on the website. The section you need is in the ‘Discover’ section, where you should follow the link to Resource Packs; the Past productions section, in particular, has a long list. Of course Stagework, also from the National Theatre, is excellent and more interactive, but these pages on the main NT site have materials from A Midsummer Night’s Dream to Hamlet and Translations.

If you haven’t already got your tickets to see The Tempest in the production from Baxter Theatre Centre and the Royal Shakespeare Company, I’d urge you to book now! We saw it at the RSC’s Courtyard Theatre, Stratford-upon-Avon on Saturday and it’s terrific: Antony Sher, John Kani and a cast of South African actors, musicians and puppeteers. Starts with a bang and just gets better! As Lyn Gardner wrote in The Guardian: ‘Michael Billington has been raving about The Tempest, but don’t worry if you can’t get to Stratford because it’s heading out on tour.’ Read Michael Billington’s 5-star review here. It tours to Richmond, Leeds, Bath, Nottingham and Sheffield – find out more on the RSC site.

Brilliant – catch it if you can!

Hamlet&Co, or Shakespeare sur la toile, is a useful introduction to Hamlet on a Belgian university site. And there’s plenty of it in English, fortunately!

Shakespeare’s birthday boat on the Thames 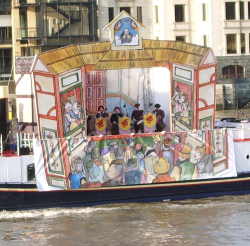 Literary Connections made the pilgrimage to Bankside on Shakespeare’s birthday on Wednesday and was rewarded by the sight of a miniature (and appropriately stagy) Elizabethan theatre sailing up the Thames in the evening sunlight, announced by the sound of trumpets (or were they sackbuts?) and drums. You can, I hope, see something of this in the photograph. It was hardly Cleopatra’s ‘burnish’d throne’ but impressive enough to entertain the crowd on the riverbank and sufficient to make us feel touched by a little of the Bard’s magic for the evening.