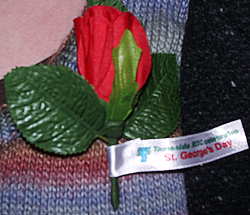 It is not only phonics that are synthetic these days – even the English rose is artificial. The one you can see here is an example. The English rose is not a reference to the daughter who is wearing it (delightful though she is, of course) but to the flower. Driving through Mottram in Longdendale on Saturday (19 April, so it was not even St George’s Day), we were greeting with the surreal sight of a man dressed as St George (that is, the St George of Daily Express mastheads and comic books) handing out red roses to drivers waiting at the traffic lights.

You may just be able to make out that ‘Tameside MBC celebrates St George’s Day’ in this way – by having men in costumes distribute artificial flowers (I’m pretty sure the box he was holding said ‘made in China’). Such is the inevitable fate, I suppose, of attempts to preserve (or more likely, create) customs beyond their natural term. Is this what we mean by celebrating ‘Britishness’? At least 23 April can be celebrated by lovers of literature as the date of Shakespeare’s birth (probably) and death (definitely). It was also the date on which patriotic poet Rupert Brooke died and was buried on the Greek island of Skyros in 1915 – an irony that provoked D H Lawrence to exclaim: ‘He was slain by bright Pheobus’ shaft . . . it was a real climax of his pose . . . bright Pheobus smote him down. It is all in the saga. O God, O God; it is all too much of a piece: it is like madness.’

Footnote on 23 April: I see that Shakespeare’s Globe Theatre is celebrating by transporting a mini Elizabethan theatre up the river by boat from Butler’s Wharf to the Globe ‘with musicians entertaining everyone along the way’. Meanwhile, The Guardian has a piece on how marketing departments are cashing in on the day – and an article by Billy Bragg entitled ‘Let’s celebrate what it means to be English’.

One thought on “Synthetic St George: is this the end of chivalry?”