Yesterday’s Guardian featured some worn out words: ‘expressions that have become such clichés that they have lost all meaning’. Aphorist James Geary nominated literally:

Why? One of the great testaments to the power of metaphor, and the malleability of language, is the metaphorical use of the word “literally”…. It’s a worn-out word, though, because it prevents people from thinking up a fresh metaphor for whatever it is they want to describe.

Geary points out, with the kind of detail that lends fascination to the humblest word, that literal

is derived from the Latin verb linire, meaning “to smear”, and was transferred to litera (letter) when authors began smearing words on parchment instead of carving them into wood or stone. Thus, the literal meaning of “literal” is to smear or spread, a fitting metaphor for the way metaphor oozes over rigid linguistic borders.’

Literally was perhaps not so fitting for an item in Glossop Life, ‘a lifestyle magazine for Glossop and the High Peak’ that also dropped through my letterbox yesterday:

Based at the top end of the High Street, her shop is very visible and has literally taken off.’

Sonia’s shop is called Frock – but I’m not sure Glossop is quite ready for a frock to be literally taken off on the High Street. What will chaps and chapesses think?

Chaps? The word has surfaced in two interesting contexts this week. In the Telegraph John Newton (no, not the reformed slave-trader who’s been featured in Word of the Day this week, but the Headmaster of Taunton School) told Michael Gove that he should axe A-level modular exams. Presumably once he’s sorted the teachers’ pensions out – and incidentally, what about MPs sorting out their own rather generous pension arrangements first? Dr Newton praises terminal tests:

You get one chance. That was it. Sorry old chap.

‘Old chap?’ So it’s only the boys at Taunton School who take exams – or perhaps only the boys who fail them? It seems rather a jocular term for the learned doctor (and the Telegraph) to be using for, as the OED says, chap is colloquial – and for young males:

‘Customer’, fellow, lad. (Todd, in 1818, said ‘it usually designates a person of whom a contemptuous opinion is entertained’; but it is now merely familiar and non-dignified, being chiefly applied to a young man.)

It seems this kind of ‘non-dignified’ language is heard not only in the Headmasters’ studies of the more select public (or private) schools but also in the higher echelons of the Civil Service, for on the front page of today’s Guardian we can read an email from an ‘official at the Department for Business, Innovation and Skills’, whose name, sadly, has been redacted, drawing up a co-ordinated public relations strategy to play down the Fukushima nuclear accident:

We need to ensure the anti-nuclear chaps and chapesses do not gain ground on this.

Surely a bit too jocular for such a topic, old chap? (Am I right to think that only a chap would write this?) At least it indicates that the chaps wear the trousers (well, not always literally, of course) and a certain sort of chap was being rather too familiar with the nuclear industry. 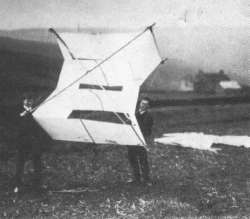 ‘Students pay tribute to kite philosopher’ said the headline in the Glossop Advertiser on 20 March. It describes a celebration by ‘fine arts and interactive arts students’ at Chunal, the hill outside Glossop, flying kites to mark the centenary of Ludwig Wittgenstein’s aerodynamics experiments at Manchester University’s Kite Flying Upper Atmosphere Station. Wittgenstein would stay at the Grouse Inn near the top of the hill – and just over another hill from Literary Connection’s own home. He boarded upstairs in a room that looked out on the moors where he often walked alone. The picture shows Wittgenstein and by William Eccles with a kite in the summer of 1908. Whilst at Manchester University, Wittgenstein developed and patented a design for a rotary blade of the kind now used in helicopters – before abandoning engineering for mathematics and then philosophy. On the way he found time to fight in the Austrian army in the First World War and become a school teacher. He hated teaching but wrote a spelling manual, commenting of his students’ reactions to his classroom guide: ‘The orthographic conscience had been awakened.’ END_OF_DOCUMENT_TOKEN_TO_BE_REPLACED