The curse of Babel Fish – or, the limitations of computer-speak 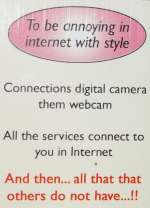 This poster is, in its own delightful way, a summary of this blog’s aim, or at least the result: to be annoying, and with style if we can possibly manage it. It is an advertisement for an Internet cafe found in the lower station of the delightful funicular railway in Montecatini Terme in Tuscany. On the left, the Italian reads: ‘Navigare in Internet con stile’, which I assumed had some relationship to ‘navigation’ – my Rough Guide phrasebook duly translates ‘navigare’ as ‘to sail’. The techno-savvy Internet Center had, however, sailed into the choppy waters of Altavista’s Babel Fish, for when I drop the Italian into the Babel Fish translation panel, it duly renders this in English as: ‘To be annoying in Internet with style’. Priceless, if also rather undermining the claim to ‘all that that others do not have’ – since there are many on the Internet, alas, who annoy. Recalling the original Babel story, we should not be surprised: ‘Therefore is the name of it called Babel; because the LORD did there confound the language of all the earth’ (Genesis 11:9).

Just to demonstrate that the Italians can do things with style, even on a railway station, here are a couple of signs from Florence’s imposing Santa Maria Novella station – much better without translation.

2 thoughts on “To be annoying in Internet with style”